Persecution of writers and censorship of their works is a practice as old as human history. Yet it’s a current practice, too.

While academic libraries rarely face challenges, schools, bookstores and public libraries are regularly asked to remove books and magazines from their shelves. Sometimes challenges are dismissed; in other instances they’re successful and a book is banned or dropped from a curriculum.

Librarians are against the censoring or banning of reading material. They feel that Canadians should decide for themselves what they choose to read, and encourage everyone to read a challenged book. The American Library Association keeps annual lists of the top-ten challenged books in the U.S.,  with the reasons that each was challenged.

For Freedom to Read Week (February 24 – March 2), TRU Library asked the campus community to reflect on which books were significant reads in their own lives.

Faculty and staff were provided with a list of commonly challenged or banned books; participants then chose a title from the list that was, for one reason or another, a particularly memorable read for them, and shared why it was important that they had access to that book when they did. The responses are now on display in the Main Library foyer, and an accompanying guide with more information about challenged and banned books is available.

“Although an equal claim could be made by several other works, I consider this to be in many ways the quintessential Canadian novel. Laurence’s protagonist, novelist Morag, a variant on the popular Canadian heroine as orphan, is not only a device for some innovative postmodern techniques, but also a vehicle to pay homage to previous Canadian writers, notably Catherine Parr Trail. The Diviners is at once a work of its time – with its racial, feminist, and postmodern concerns, for example – and an exploration of this country’s historical narratives, even as it contributes to the construction of national mythologies.   The sex scenes for which this novel was banned in some Canadian high schools would not turn the heads of many readers today.  Call me an old-fashioned nationalist (please) but Morag’s discovery about where her heritage lies – where her stories are – causes my heart to swell simply in recollection.” 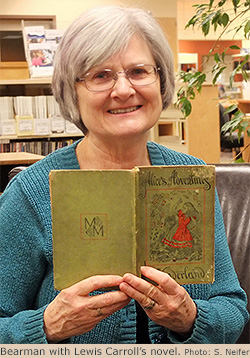 “My family arrived in Canada from England shortly after  the Second World War as my parents sought a better life for their children.  Neither parent had much in the way of a formal education, but they brought with them the precious books they had learned in their early school years, such as Alice’s  Adventures in Wonderland.  This book and other classics formed the literary atmosphere in our house and became the catalysts of imaginative play.  My love of literature started with an old 1930s edition of Alice’s Adventures in Wonderland and developed into a passion for Victorian fiction, which I now share with students.”

« Think today’s scary? Wait for the zombies
It’s back & hungry: Food for Fines »