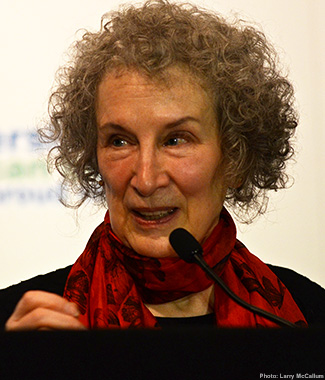 Yet we’re hardly original in that respect. Throughout its history mankind has cultivated monsters — including the “undead” — as expressions of our anxieties. With that in mind, Canada’s greatest living writer traced our zombies’ lineage in a wry, digressive discourse on “The Evolution of Zombies, their Past and Future”.

Atwood enumerated various zombie forebears, beginning with the Book of Revelations and winding through Grendel in Beowolf and Frankenstein’s monster in the 1818 Mary Shelley novel. From T.S. Eliot’s 1922 poem The Wasteland, she read a passage suggestive of a zombie horde:

“A crowd flowed over  London Bridge, so many, I had not thought death had undone so many”

And Eliot’s narrator, seeing among the crowd an old friend, Stetson (who’d died in the First World War), asks,

“That corpse you planted last year in your garden, Has it begun to sprout?  Will it bloom this year?”

In the late 19th century, the undead Dracula sublimated unease concerning aristocracy, tuberculosis and repressed sexuality; while in recent decades vampires have morphed into cute teenagers who enjoy daylight like the rest of us. Werewolves, another form of transfigured humanity, are in fact “adolescent males, hairy and wild,” Atwood said.

Zombies, on the other hand, are late arrivals, having exploded in popularity since their debut (more or less) in George A. Romero’s movies of the ’60s and early ’70s, such as Night of the Living Dead. And they make the present day “look quite good by comparison” with our anxiety-inducing future, Atwood noted — as in, “You think you’re ugly now? Just wait.” If vampires suggest tuberculosis, zombies hint at dementia and Alzheimer’s Disease, and possibly even “the energy-sucking presence of increasing numbers of old people” in society, even though in horror films such as 28 Days Later the zombies all appear to be young. And Atwood mentioned Granta Magazine writer Naomi Alderman’s speculation that whereas vampires are popular during prosperity, zombies proliferate during recessions. They’re creatures of the apocalypse.

“Zombies are the urban poor,” Atwood said. They represent “the end of civilization, when all that matters is, do you have food, do you have guns.”

If that’s a future too scary to contemplate, Atwood also mentioned the currently popular movie Warm Bodies, in which zombies — like vampires before them — transform into cute, warm-blooded teenagers. Awwwww.

Asked about another type of dystopian future, the one portrayed in her 1985 novel The Handmaid’s Tale, Atwood suggested it wasn’t that far from the policies favoured by some candidates in the recent U.S. election. Society needs to be ever vigilant against such encroachments, she said.