What would you think of a public institution that actively supports an industry that’s bleeding it of money? 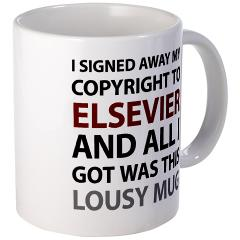 Universities and journal publishers are locked in just that type of relationship, an open-access forum concluded. The recent rise of open-access journals could challenge the power of the commercial academic-journal publishers, such as Elsevier, Sage and Springer Publishing. But universities’ systems of promotion and tenure — which typically insist on publication in prestige journals — instead favour the interests of those big commercial publishers.

Because the scholarly publishing system benefits publishers who can charge universities whatever they want, universities’ expenditures on journal subscriptions virtually quintupled between 1986 and 2009, even as the Consumer Price Index less than doubled, the forum heard.

“Open Access journals are being disadvantaged in the tenure process,” a guest speaker, Nicole White, told the forum, because universities’ academic departments usually expect their faculty to publish in long-established journals — the same journals whose subscription rates have been escalating so wildly.

Nonetheless, “the Internet has given scholars a platform for sharing their research, whereas before they had to rely on commercial journal publishers,” said White, the team lead for scholarly communication at Simon Fraser University.

Under the current system, however, university faculty, whose research is publicly funded, provide those commercial publishers with free content, which is then reviewed for free by volunteer scholars on the journals’ editorial boards. The publishers, such as Elsevier and Springer, then reap huge profit margins selling the content back to the universities that funded it, at ever-more-unaffordable subscription rates. One university’s annual subscription to a single journal can cost well over $30,000.

As a means for scholars to share and disseminate research, Open Access has the potential to enrich education and accelerate the pace of discovery and innovation by reducing barriers to access. But it faces barriers itself, in  the form of long-established subscription journals and their publishers.

“Publishers have built up big reserves against which open-access journals have to struggle,” said Roger Collins of TRU’s School of Business & Economics, who served as a member of the forum’s panel.

As well, many commercially published journals “have had a 350-year lead” in which to establish their reputations in their fields, Collins added. “If your dean doesn’t like open-access journals, then you’re in trouble.”

Another drag on the open-access movement is the cost of open-access journal publishing. While OA journals provide free access, they’re not free to produce, and many must charge scholars a fee to help cover their costs. SFU Library addresses this by hiving off nearly one percent of its collection budget and making it available to SFU scholars to defray those charges. Last year $83,000 was expended to publish more than 90 articles (about one-quarter by graduate students, the rest by faculty) at an average cost of $1,300.

Still, the fledgling open-access movement now has 8,300 journals listed in the Directory of Open Access Journals (DOAJ), though many of those are start-ups that have ceased publication. Tens of thousands of scholars joined a boycott of Elsevier publications this year.

Yet, ironically, the movement struggles to gain a foothold with the very universities who stand to benefit from it. “There’s a lot of cultural work to be done to take advantage of what’s there,” said another panel member, Brian Lamb, TRU’s Director of Innovation.

Exceptions include Harvard University and Canada’s own Carleton University, which have mandated open-access publishing by their scholars. “More and more funders are requiring that grant recipients publish in open-access repositories,” White said. Research Councils UK is making OA publishing mandatory for all research funded by its seven councils. Canada’s Social Sciences & Humanities Research Council (SSHRC) has signed the Berlin Declaration but has stopped short of such a mandate.

“What we’re doing is a transfer of wealth from the public to the for-profit sector,” Lamb noted. “If we can’t get our act together, do we really deserve this public trust?”

White described the standard contracts that commercially published journals impose on scholars, who as a result often find themselves prohibited from sharing their research even with their own students. By contrast, “green” open access is an arrangement by which a scholar may publish in a commercial  journal while retaining the right to disseminate his research elsewhere, according to SHERPA-RoMEO’s code for highlighting publishers’ archiving policies.

Panel member Norm Friesen, Associate, Centre for Student Engagement & Learning Innovation, said TRU hosts three OA journals on campus, including Phenomenology and Practice. He said he’s customarily disseminated his research regardless of restrictions imposed by commercial publishers. “After a year or two, I put it online and a publisher has never come after me.”